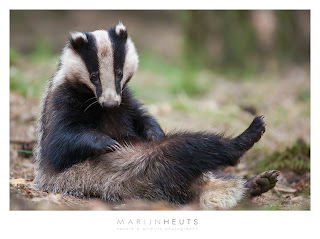 About a month ago, I revisited the badger sett that gave me so much fun in June last year. I figured that if I were to visit a month earlier, the foliage would be less dense and I would have more light to work with. Which in turn would allow me to focus more on behavioral images instead of portraits only. It appeared I had encountered a luxury problem: there were too many badgers. As a consequence the sows had moved the tiny cubs away from the hustle and bustle of the main sett. What was left were 10 adult badgers. And since adult badgers have less need to play, they only leave the sett at around 9pm when it gets really, really dark below the canopy. There I was, once again restricted to taking portraits at 1/15th of a second, this time even at ISO6400.

Until yesterday, when I was introduced to another sett in a completely different setting. This sett was a rather small one, in relatively open pine forest. It has less photographic potential, because not so scenic, but I was told the badgers would show early and thus I would have plenty of light to work with. And indeed, at 7.30pm the first badgers showed and started their routines of scratching, grooming, playing and tumbling. The resident cubs were still very, very small, a real treat to watch. The weather forecast proved wrong again, with variable winds and a cloudy sky. So we had to move around to keep downwind and the ISO still had to be increased to 1600/3200. But I got my first behavioral shots and had a blast watching the 12 (!) badgers at this sett, 5 of them tiny cubs. Rest assured I will go back soon and hope for even more light and behavior. In about two weeks, the cubs will be big enough to venture about on their own without following mommy’s tail everywhere.

The pose in this particular image reminds me of those burlesque dancers at the Moulin Rouge lifting their short skirts. Or is that just my imagination?