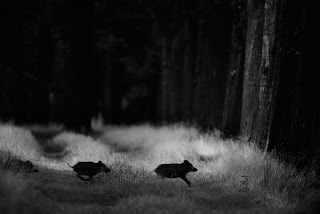 A while ago I mentioned that I had found a sounder of Wild Boar (Sus scrofa, Wild Zwijn) in an area close to home where I had not expected them at all. Now, some weeks later, I have found out that there are many more where they came from, and even more at other new locations in my area. Their numbers increase rapidly! I decided to invest some time and try to get decent photographs, as I had only one image in my archives from a very short encounter four years ago. I got lucky on the first evening. On foot, on my way to where my chances would be best, I came across four sows with at least 20 piglets, feeding on a grassy strip along a large cornfield. The wind direction was in my favour, so I was able to get some nice shots of the boar feeding.

I was hidden underneath my camocloth, but like many mammals, their eyesight is way behind their hearing and smelling ability. Somehow, after a few minutes, they nonetheless got notice of my presence and they slowly walked into the cornfield. Those sows are really big, but they disappeared silently without even leaving the slightest trace. No broken corn stems at all. I sat still for a while and only heard the sound of rustling leaves, as if a stiff wind blew though the fields. There hardly was any wind, thus I followed the sound and hid behind a tree at the other side of the cornfield. After a few minutes, the whole gang appeared again, crossed the path, crossed again, and again and again and disappeared into the cornfield for the last time. As it was getting dark, I left them to it.

Another great experience with native mammals and I will certainly invest more time. I have some photographs in mind that I really want to translate onto digital film.

But that will be for another time. Last Monday, my wife and I became the proud parents of our daughter Elise, sister to our daughter Linde. The next weeks will see me spend all my time with my family and I will aim the camera only in their direction. In the meantime, I will keep updating the blog, as there are enough recent images that I have not yet shared.