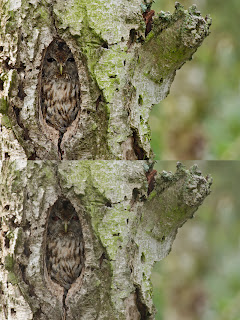 Some time ago, I mentioned that an image of mine had been disqualified at a major contest because of the unallowed use of Photoshop. Now let me state that I am not angry, disappointed or anything like that about it. I just did (and still do) not agree and am curious to your opinion.

To the left is a comparison between the entered image (top) and the original image (bottom). As you can see, other than some slight levels and contrast work, all I did was reduce the red in the eyes that resulted from the use of fill flash.

The contest rules are not very detailed and state something along the lines of “please stay as close as possible to what you saw at the time of taking the photograph”. Of course, removing or adding items is not allowed. Now, when I photographed the owl, it did not feature red eyes from hayfever or a night at the bar. The eyes only took on the red color from the use of fill flash.

So in my opinion, by removing the red color from the eyes, the image got a lot closer to what I saw at the time of taking the photograph. If what I did to the original is put along the non-detailed contest rules, I cannot do anything other than conclude that a disqualification of the image was not rightful. What do you think?