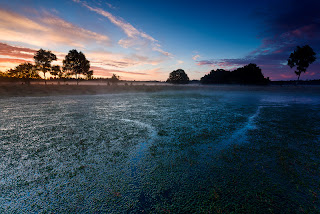 It had been a while since the last time I went out to photograph without a specific target in mind. I do like to focus my attention on a subject and ignore everything else, but sometimes it can be really relaxing and rewarding to just go to a promising location and see what happens. Last Saturday, I got in the car at 4.15 am, with only my landscape and macro gear in the bag. When I left home, the sky looked promising with medium cloud cover and a temperature that was a lot chillier than expected. When I arrived at my destination 15 minutes later, I was surprised to see a fog cover above the fens.

Although it was tempting to walk to the area with the densest fog, I resisted and instead opted for an almost dried fen. I had been to this spot before, when water levels were way higher. Now I could walk closer to the shoreline trees for a better composition. Animals had paved the way during the night and created a marsh highway. Perfect leading lines for a wide angle landscape shot. I setup the tripod, chose my composition and waited for whatever the sky was about to show me. Because of a slight breeze, there were hardly any mozzies around, so it was a rather pleasant experience. The more so, when you add into the equation a warm cup of freshly grinded coffee and a couple of Nightjars calling overhead. The only thing that took away from an almost meditative experience were two early shots fired by a local hunter.

After a while, when the sun got closer to the horizon, the sky became more colorful. Not as pink as I had hoped for, because of some low hanging cloud cover, but nice nonetheless. The fog was a welcome bonus. I spent the next 20 minutes or so working on my composition and moved on when the sun rose above the horizon. The long grass lit up in golden hues, dotted by an unbelievable pattern of dew-covered spiderwebs. Bog Heather was already in full bloom, Roe Deer barked in the distance and the fog was set on fire. It was one of those mornings you feel privileged to be out and marvel at natures beauty in solitude. I got chills up my spine.

To end this blog, a word of praise on the 5D3: the built-in electronic bubble level is a very handy tool, thanks Canon. I also tried the in-camera HDR function and it rocks! The resulting photograph looks both natural and beautiful, something that is hard to achieve in post-processing. The only small nit is that the HDR file is a jpg.