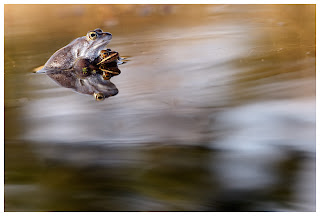 It’s that time of year again. From the middle of March on, when temperatures rise into the double digits and the air is a bit moist, male Moor Frogs come into heat. Thanks to an ingenious physical process, their bodies take on a beautiful blue color. Moreover, the males make plopping sounds. Imagine hundreds of people opening bottles of beer, and you may get an idea of what it’s like. All this display of color and sound to attract a female. When found, the male clings onto the female, only to let her go when she has dumped her spawn in the water. The male then fertilizes the spawn and floats between his own offspring, so to say.

Many Moor Frogs die in the process. Some females are simply crushed between fighting males, while both males and females will fall victim to a hungry heron or egret. Clumps of translucent jelly are the silent witnesses of these small dramas of nature. But of course, enough spawn is created to make sure the Moor Frog population will survive another year. Next year, about the same time but certainly the same place, they will gather again to perform one of natures small wonders. If you want to be a witness, keep an eye on the thermometer and pay several visits to their expected habitat, as the whole process hardly ever lasts for more than a few days.