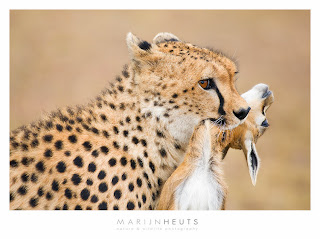 One of the many highlights of our week in the Masai Mara was being a witness to a Cheetah kill. We followed a female Cheetah that was strolling around a viewpoint hilltop, seemingly at random. Our guides knew better, they had a perfect idea about what she was up to and they informed us that it would be worthwhile to stay with her. We saw her stare into the distance, lie down under a shady tree, sit on a termite mound, stare into the distance, rewind and repeat the process. After about half an hour, she seemed to become more active and alert, but all we could see in the distance was a herd of Zebra. Not a typical Cheetah prey, way too big and strong. But before we could speak our doubts, she dashed off into the distance, leaving a dust trail and a herd of Zebra that ran off in full panic. Our guide stepped on the gas, made a very fast tour around the hilltop and rushed to where the dust was now slowly settling. Naively, I thought we might still be on time to witness her taking down a prey, but when we arrived after not more than 15 seconds, the Cheetah already calmly strolled towards us, the deadweight of a baby Thomson’s Gazelle dangling lifelessly from its jaws. It must have hidden in the grass somewhere, but not good enough to fool a hungry cat with unbelievable eyesight. The job was done, she took her prize to a quiet spot under a bush and after she caught her breath, started finishing it. The actual feast was surprisingly neat and orderly. I had expected a lot of blood and gore but this kitty gloriously passed her etiquette exam. Later that week, we witnessed a coalition of two brothers and a sister chase and take down an adult Reedbuck. Again, the actual chase and kill happened far away, but it is quite something to be able to watch the whole process from start to (literal) finish. I feel truly privileged.