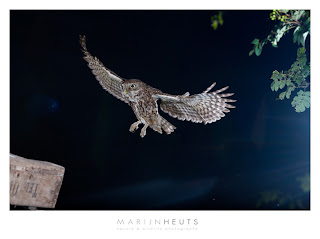 Although I was rather pleased with the results from my first late night session, I was not sure about the busy, leafy background. Since the background was very close to the flight path of the Little Owl, there was absolutely no way I could both light the owl in a pleasing way and keep the background dark. The only other option was to move the camera to the other side, and so I did. I left the two main lights in place, because the light on the owl worked out well. I only had to move the backlight, because it was visible in the frame when I moved the camera to the intended position. To give the photographs a bit more interest, I decided it would be a good idea to include some of the foliage and the actual target for landing, the vegetable box that has featured in so many images before and is the only prop the owl accepts. An advantage of doing so was that I could manually prefocus on the leaves, knowing that the owl would pass them very closely. All I had to do was sit in the tent and press the remote release when I thought the owl was in the right place.

After having checked all the connections several times (lots of possible weak links in the chain, because the remote release was 7 meters of cable constructed from several McGyvered bits and pieces) I sat down in the hide and waited. As usual, the female showed up at 22.15, but instead of going directly for the bait, she started a 15-minute duet with a distant male. Not sure what to make of it. Is it our not-so-dead resident male who decided family life was not for him, or a friendly neighbour, or an interested bachelor? I was happy (also for future breeding purposes) to hear a/the male, but it also made things harder for me. With every passing minute, it got darker and darker and thus very hard to make out the shape of a flying owl against dark bushes. But it seems I am getting the hang of it, as at the end of the session, 60 out of 70 shots taken were in focus. I had 60 keepers with the wings in all kinds of positions, something I would never have dared to hope before. I chose the one above because it is one of only a  few with the claws extended. The batteries in the backlight were not 100% and failed every third flash, so several shots feature a pitchblack background and flatter light on the owl. Nice in their own right, but I prefer the ones with backlight for more depth. I also like how part of the light rays ended up in the frame, something I had not planned for but was a happy accident. This was the third and last flash session with the owl, no need to put them under any more stress than necessary.